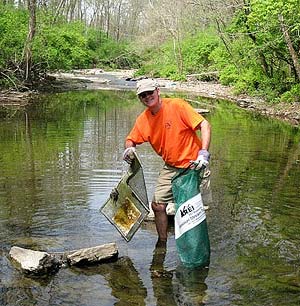 The loss of water quality in urban areas is due to many factors. Some of these may include run-off during storm events from impervious surface areas, yard waste in streams, pet manure, invasive species, trash, and/or road salt. These factors can lead to increased water pollution, sedimentation, infrastructure damage, erosion and creek-widening resulting in property loss, flooding and property damage.

In 2014, DCWA project horticulturalist Cindy Gilberg was awarded the Certificate of Excellence for her work with the Alliance.

The Deer Creek Watershed Alliance received a 2013 Civic Stewardship Award from the St. Louis Chapter of the American Society of Landscape Architects (ASLA). The Civic Stewardship Award is an annual award given by the St. Louis Chapter of ASLA to recognize individuals, businesses, and organizations who have raised awareness or have shown stewardship of the natural or built environment through their actions and deeds.

Deer Creek Watershed Initiative won the 2009 Intelligent Use of Water State of the Union Award from Rain Bird. Download the press release.

Want Your Kirkwood Yard to Look Like This?
Kirkwood Patch, January 29, 2013